This scholarship is a lasting tribute to Mike Warter, a true pioneer for women’s soccer in Minnesota. This fund will be a reminder to all, of Mike’s commitment to the development of players by nurturing good play, good friendships, better facilities, proficient coaching and the happiest of times for all participants.

Mike Warter made his presence known on the Minnesota soccer scene for more than 25 years. One of Mike’s primary goals was to help female soccer players obtain college scholarships. In order to achieve that goal, he believed the players had to be seen. To attain this, Mike developed a local Minneapolis park team into one of Minnesota’s Premier girls’ teams, Sota Soccer. With this club he worked hard to travel outside the state of Minnesota to face stiffer competition. Mike was described as a “player’s coach”, being there for his players both on the field and off, in good times and more importantly, in bad. Mike’s work did not end with Sota Soccer. He was a pioneer at the University of Minnesota, coaching their club team for nine years including a National Club championship in 1988. Former University President, Mark Yudof, stated in a letter to the family, “He was a mentor and role model for many student athletes.” Mike was inducted into the MYSA Hall of Fame in 2007.

The Mike Warter Scholarship is awarded each summer to one male and one female Minnesota soccer player who is registered to a MYSA affiliated club and is a graduating high school senior. The scholarship is a $500 tuition award that is to be used toward expenses at an accredited college, university or community college.

The application window will open in early 2022.

Lauren Schmitz is a graduate of Sartell High School with a 4.0 GPA and plans to attend Saint Scholastica to pursue a degree in Biology.

Lauren played soccer for 9 years as a member of Central Minnesota Youth Soccer Association (5 years on a traveling teams). She played 4 years of high school soccer, 3 of which on the Varsity team. Lauren was also a captain on her Varsity team. She was awarded All-Conference, and St. Cloud Times All-Metro Team Player. She's also coached players ranging from 4 to 14-years old for Sartell's Community Rec Soccer as well as a U10 Sartell traveling team.

Outside of her soccer resume, Lauren has volunteered with SFX Church, Red Kettle Bell ringing Kids Fighting Hunger and Feed My Starving Children.

Ryan Eckstrom attended Simley High School and maintained a 3.97 GPA. He plans to attend the University of Minnesota for a degree in Finance.

Ryan was a 4-year Varsity starter in high school and was named Most Improved his Freshman year. He was a 2-year captain, a 2-time All-Conference winner, and an Academic All-Conference Student/Athlete Award winner. Ryan has been a captain of his MN League One club team at Inver Grove Heat for 5 years. In addition to playing, Ryan has also been a certified referee since 2017, and coaches youth ages 5-10.

Ryan was a member of the National Honors Society, Head of Fundraising for Student Council, and Spanish Club. He also volunteers at Feed My Starving Children and the Special Olympics. Perhaps most notably, Ryan helped co-found a local non-profit called "Hundreds for Heroes" to help give back to hardworking community members. 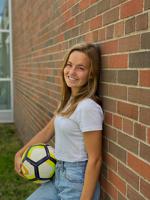 Callie Patraw was a defender for Boreal FC and part of the 2019 Presidents Cup National Championship team. Along with playing Premier for the past three years, Callie was also two-time All-Conference and Miss Defense, Captain and MVP at Elk River High School. Also, Callie was a referee and helped coach 8 year olds during her club's winter training.

In addition to Callie's stellar soccer resume, she also performed well in the classroom with a 3.8 GPA and plans to study law in college.

Jacob Salmon played soccer for Salvo SC and Eastview High School. Jacob's club team won State Cup the past 3 years and was runner-up at the Midwest Regional Championship. During high school he was a two-time all section and all conference, and 1st team All-State along with a finalist for Mr. Soccer.

Jacob was also a referee for three years, AP Scholar with Distinction and volunteered at the Apple Valley Cemetery for two years.

Sydney Essler is a graduate and the valedictorian of Rosemount High School. She will be attending Washington University in St. Louis, MO. with plans to study both computer science and mathematics as well as compete on the soccer and track teams.

She was a four-year varsity player in both soccer and track as well as one year in basketball. Her soccer success includes team captain, All-Conference twice, All-Section twice, All-State, Ms. Team MVP and All-State Game MVP, as well as a section championship and state runner-up. At the club level with her Minnesota Thunder Academy team, she has finished as Minnesota State Cup runner-up twice and earned one State Cup Championship, attained US Youth Soccer Midwest Regional League Premier I status and participated in Elite Clubs National League (ECNL). Her achievements do not end there as she has earned several academic-based athletic awards including: Scholar Athlete, Minnesota Soccer Coaches Association Academic Excellence (twice), All-Section Academic Team (three times) and Academic All-State (three times).

Outside of athletics, Sydney is a member of the National Honors Society, Spanish National Honors Society, Fellowship of Christian Athletes, DECA, Math Team, Quiz Bowl, Computer Science Club, Save the Bees Club, Freshman Select Choir and Group of Active Teens. Through these clubs, she has gained leadership experience and the opportunity to give back to her community by creating a bee garden at her high school, volunteer more than 100 hours at her elementary school as well as coach track and soccer for Rosemount Area Athletic Association in addition to being a soccer referee for three years.

Jacob Redden is a graduate of East Ridge High School in Woodbury. He will be attending Bethel University with plans to study biology and play college soccer.

He was a four-year varsity player on his high school team where he was named All-Conference twice in addition to Team MVP, All-Metro and All-State his senior year. Aside from high school soccer, Jacob also played for Sporting St. Croix and has been captain for the past five years. His club team won the 2016 Minnesota State Cup and participated in the US Youth Soccer Midwest Regional League. Individually, Jacob has been selected for the Minnesota Olympic Development Program and twice named to the Midwest Regional team. He has also coached youth soccer with Woodbury Parks & Rec and at Bethel University summer camps.

Outside of athletics, Jacob’s list of extracurricular activities, community service and volunteerism is extensive. He is a member of the National Honors Society, on Student Council, an Advanced Placement (AP) Scholar and was recognized with the ExCEL Award for excellence in community, education and leadership. Jacob was a member of the Math Team, Ping Pong Club, Computer Programming Club, Fellowship of Christian Athletes and founded a Drawing Club at his high school. He has volunteered his time at Feed My Starving Children, House of Charity, Stone Soup Thrift Shop, Woodbury Senior Living and Nuestros Pequenos Hermanos (Our Little Brothers and Sisters) whose mission is to care for orphaned and abandoned children in Latin America, as well as serve on mission trips across the country.