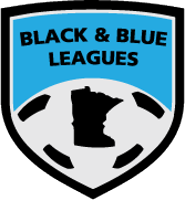 Minnesota Black and Blue Leagues are intended for 9U-19U multi-sport or seasonal-committed athletes.

Black is the higher level league compared to the Blue League. Each season clubs choose which league to enter their teams as there is no promotion/relegation or roster continuity rules in either league.

STRUCTURE
Teams will be placed in brackets within their chosen Black or Blue league based on their geographic location. Teams will get a schedule and have the ability to reschedule any games.

REGIONS
Black and Blue teams are "traveling soccer" teams that are expected to travel for games. Leagues will be organized by regions to help keep travel time to a reasonable amount. The regions consist of Central, South, Arrowhead, Prairie, Metro, Wisconsin District 9 and Independent regions.

TEAM CONTACT INFORMATION
Each team is responsible for providing accurate contact information to MYSA. Only listed team contacts and club officials may communicate with MYSA regarding team, league, and game issues.

If teams cannot be placed in a reasonable bracket due to geographic or play level reasons, MYSA will refund $200 of their team fees and still provide player passes for them so they can participate in other events.

SCHEDULE
Summer season typically consists of 8-12 (weeknight) games to be played from early May to early July.

Each fall, MYSA hosts a culminating tournament at the end of the fall league for 11U–15U Black & Blue teams.

9U and 10U teams will compete in a round-robin Festival.

Each summer, MYSA hosts the Summer State Championships for 11U-19U Black & Blue teams at the end of the season.

9U and 10U teams will compete in a round-robin Festival.